The European Federation of Foie Gras attaches great importance to offering to European consumers and restaurateurs the quality expected from a delicacy like foie gras.

The current definition of foie gras laid down by EU Regulation 543/2008 allows consumers to make informed choices and not to be misled. Foie gras products which do not comply with the following legal requirements cannot be sold on the European market:

Article 1, point 3 of the European regulation – Definition of foie gras
“The livers of geese, or of ducks of the species Cairina muschata or Cairina muschata x Anas platyrhynchos which have been fed in such a way as to produce hepatic fatty cellular hypertrophy. The birds from which such livers are removed shall have been completely bled, and the livers shall be of a uniform colour. The livers shall be of the following weight:

The European foie gras sector vigorously supports the maintenance of this definition in all its components for several reasons:

Regarding the presence on the market for many years of other products from palmipeds, Euro Foie Gras argues that it would be misleading for consumers to make them believe that a product other than foie gras could have the same intrinsic characteristics. They are different products.

Animal welfare is a prerequisite for the production of foie gras. European producers of foie gras are subject to Directive 98/58/EC concerning the protection of animals kept for farming purposes. In addition, two recommendations on the production of foie gras relating to Muscovy ducks, their hybrids and geese were adopted on 22 June 1999 under the European Convention of 1976 for the Protection of Animals kept for Agricultural Purposes (convention governed by the Council of Europe).

European Charter on breeding of waterfowl for foie gras

Eager to go further than the European legislation, Euro Foie Gras, very concerned about the respect of animal welfare, published in 2011 in the form of a charter the commitments that must govern this farming activity in the spirit of the 12 principles retained in the “Welfare Quality Project”.

This charter has been signed by the representatives of all the foie gras producing countries in the European Union.

In addition, it should be noted that several initiatives have also been taken at national level. To find out more, you can consult the page dedicated to our members.

Offering quality of life to animals is a daily concern of any breeder of fat palmipeds who must ensure their welfare, comfort and optimal hygiene at all stages of production. These elements are fundamental for the animal and a prerequisite to obtain a noble product of quality.

Living most of their life outside, palmipeds used for the production of foie gras live in collective housing for a few days during the fattening phase. Beyond the semantics and the negative connotation that can be attached to certain terms, what matters to European foie gras breeders is the real conditions in which their animals are raised and the improvements that can be made.

At the cost of substantial investments, the European waterfowl sector has changed all its equipment in response to the Recommendation of 22 June 1999 of the Council of Europe. Thus, all individual housings – also called “épinettes” – have been replaced by collective housings meeting all the requirements laid down in the Recommendation which states that:

Housing systems for ducks shall allow the birds to:

Individual housings – épinettes – no longer exist in the EU. 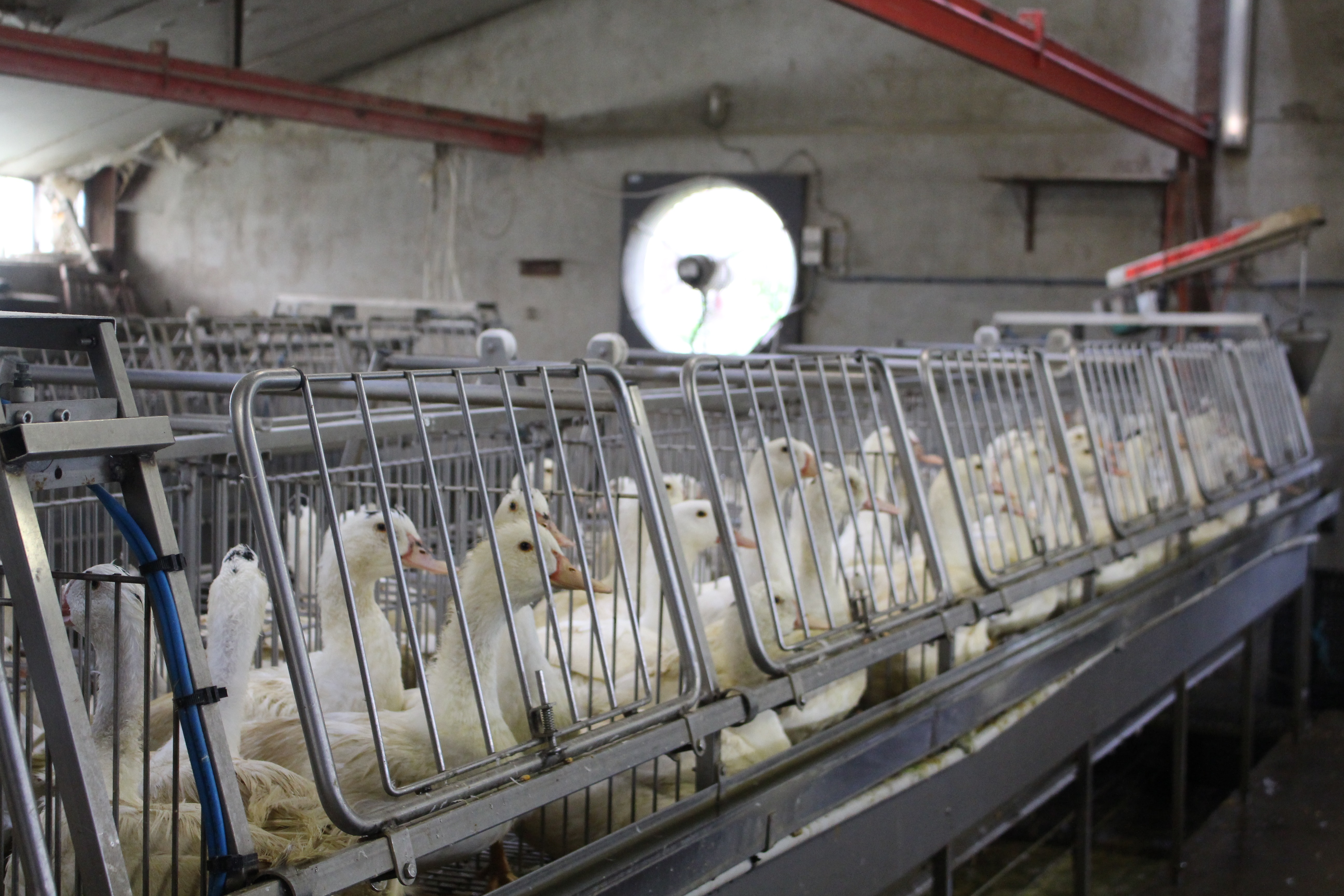 Collective housings are being used.

Thanks to research, technical progress has been made to ensure that the housing system meets animal welfare requirements, sanitary imperatives and the ergonomics of the farmer’s work while achieving excellence in production: improvement in equipment, study of optimal dimensions for animals, while allowing the operator who feeds them to make a safe gesture, etc. Euro Foie Gras points out that the progress made, thanks in particular to the research work, has made it possible to halve the duration of the fattening phase, and therefore the time spent by waterfowl in collective housings.

For more information, please consult our document on collective housing.

Keeping their animals healthy is a daily concern for breeders of fat palmipeds. They therefore make every effort to ensure that ducks and geese are raised in the best conditions.

Avian influenza is one of the main threats to the sector. Open air being a fundamental characteristic of the breeding of fat palmipeds, Euro Foie Gras has made the reinforcement of biosecurity measures one of its core objectives in order to prevent and cope with the emergence of new outbreaks both at national and European level.

The European foie gras sector is in favor of the following measures:

One of the particularities of foie gras farms is their regular opening to the public, for the sake of information and transparency. Visitors enjoy discovering in family the reality of foie gras production, extensive and often family.

Proud of their production, the farms offer guided tours to discover the different stages of production as well as their delicious and numerous products: foie gras, rillettes, duck breast, confit, pâté, etc.

For a field experience, do not hesitate to contact us. Our dear foie gras palmipeds will be delighted to say hello.