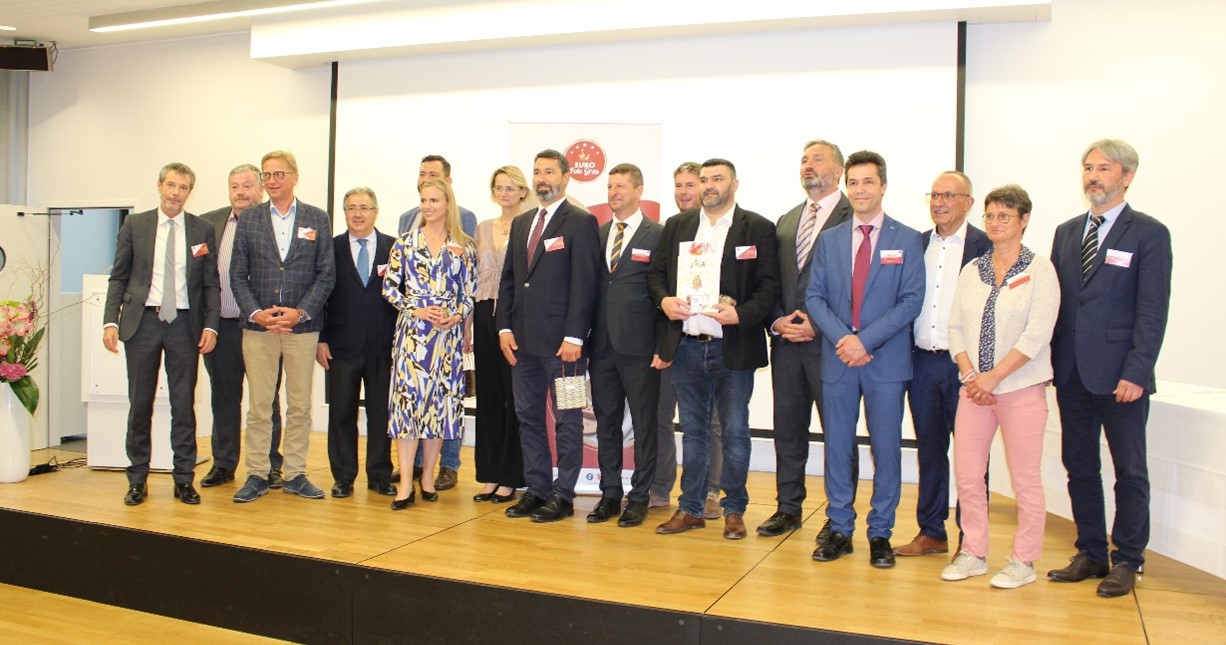 Brussels, 12 May 2022 – MEPs, members of the permanent and regional representations to the EU, and other friends of foie gras gathered on 11 May at the Representation of the Nouvelle-Aquitaine Region in Brussels to celebrate this delicacy and the women and men who produce it. It was also an opportunity to thank MEP Jérémy Decerle for his commitment to foie gras production by awarding him the Federation’s Golden Palm.

Christophe Barrailh, President of the Federation, opened the Cocktail of the Circle of Foie Gras Friends by thanking MEPs for their support during the vote on Jérémy Decerle’s implementation report on on-farm animal welfare. “Extensive, family-based, mainly open air and respectful of animal welfare” are the foie gras production specificities that were recognised in this report on 15 February 2022.

The President of Euro Foie Gras then spoke about the avian influenza outbreak that is severely affecting a large number of European countries and the entire poultry sector. “The economic and social consequences for farmers and for our animals are terrible. Euro Foie Gras is convinced that in addition to biosecurity and surveillance measures, which are and will remain the pillars of the fight against avian flu, vaccination is now an essential complementary tool for an efficient fight against this disease,” he stressed.

The Federation also expressed its gratitude to MEP Jérémy Decerle, who has succeeded in highlighting the efforts made by breeders on their farms, while promoting the foie gras production sector. Christophe Barrailh praised “a man of conviction and action, who very quickly became a key MEP in the Agriculture Committee“. In recognition of his work, which played an essential role in the European Parliament’s positive vote in February 2022, the Federation awarded him the Golden Palm and also inducted him as a member of the Circle of Foie Gras Friends.

Jérémy Decerle thanked the Federation and reacted: “I am firmly convinced that farmers have a decisive role to play in Europe and must be defended.” He praised the fat palmipeds rearing method, essentially based on family farms, which offers a significant added value. Euro Foie Gras was also pleased to induct six new MEPs from different countries (Czech Republic, Denmark, Sweden, Poland and France) and also thanked the MEPs already members of the Circle.

The Foie Gras Friends had not been able to meet for more than two years due to the Covid-19 pandemic. The evening was rich in exchanges on the challenges and opportunities of the sector, while tasting delicious appetizers based on fat palmipeds.